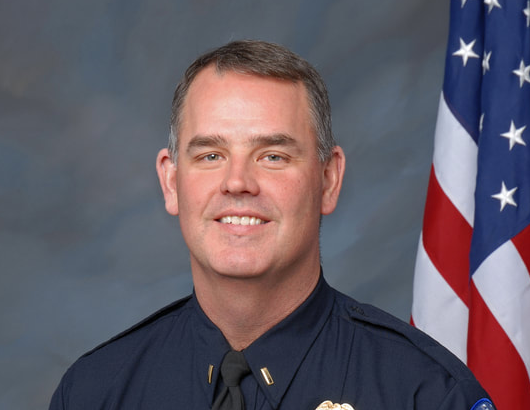 The new Grinnell Police Chief, Michael A. McClelland, brings 25-years of military (U.S. Army, Guard and Reserve) and 24-years of civilian law enforcement experience to his new job.
Originally from Des Moines, Chief McClelland most recently worked for the Aurora Police Department in Aurora, Colo.
He has held numerous positions within the department including patrol, field training officer, traffic officer, patrol sergeant, police area representative sergeant, awards board chairman, traffic investigations sergeant, patrol watch commander, traffic section commander, training section commander, honor guard commander, investigative support section commander, emergency response team commander and force review board member.
When asked why he applied for the Grinnell position, Chief McClelland said he and his wife, Mindy, wanted to return home to Iowa.
Mindy is from Charles City.
Chief McClelland said his stepfather and stepbrother influenced him to enter law enforcement. Both men worked and are now retired from the Des Moines Police Department.
“I grew up around it,” Chief McClelland said of law enforcement.
He takes the reins of the Grinnell Police Department on Monday, Jan. 4, 2021.
When asked if he planned any changes in the department, Chief McClelland said he had no plans to bring change in the early going.
“I plan on listening and observing for first 30 days or so, gathering input from the officers, community leaders, stakeholders, faith-based groups, Grinnell College and members of the community on what they want from their police department,” he said.
He added that Chief Reilly was working with several qualified candidates to fill department vacancies and he will continue in that role.
“Once restrictions of COVID are eased, I would like to take a good look at revitalizing our Reserve Officer program, along with a volunteer program to assist our day to day operations,” he added.
When asked if he had any other thoughts, Chief McClelland said Chief Reilly did an amazing job with the department and he is very fortunate to be falling in on such a great organization with no problems.
“I’m looking forward to starting this next chapter in my law enforcement career,” said Chief McClelland.