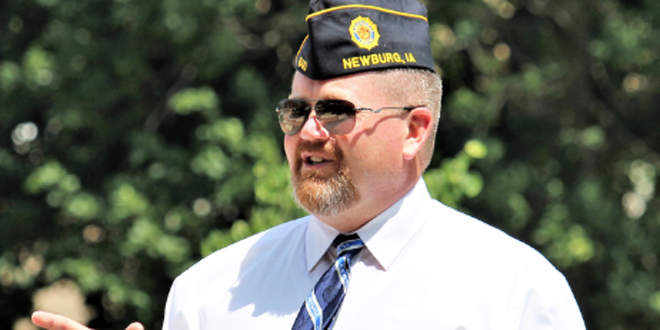 “We are moving in the right direction with the right team and assets.”   That is the assessment of Randall Hotchkin, member of Grinnell’s Veterans Memorial Commission, following the regular monthly commission meeting on Monday, March 11.

The comment refers to progress toward establishing the Prairie Star Artist Residency in the Veteran Memorial Building in Grinnell’s Central Park.

Monday’s meeting was the first since December 2018.  Lack of a quorum prevented official business being conducted at the January meeting, and severe weather conditions forced the cancellation of February’s meeting.

Four of five commission members were present March 11; four community members made up the audience.

According to a previously established timeline, the month of March calls for finalizing promotional materials from Amperage Marketing & Fundraising, for receiving final plans from RDG Architects, and for making assignments toward non-public fundraising efforts.

Amperage, Hotchkin reports, will shoot a public service announcement on April 1, which will lead to developing additional fundraising materials.

The commission has asked RDG Architects to maintain design plans that call for artists’ rooms to be in the basement.

“We are asking that they develop a floor plan that has the living quarters for the artists on the lower level and that the upper level be left open and flexible,” Hotchkin stated.

The upper level will be devoted to displays and a meeting area for veterans’ and others’ organizations.

This design request appears to be a return to the original Prairie Star concept.  During the December meeting, a proposal that artists’ quarters be created on the first floor was discussed because doing so was expected to be both cost effective and a marketing advantage, but the possibility of public pushback was also a consideration.

The Veterans Memorial Commission has also asked that RDG’s plans reflect both the building’s original architecture and that of the new structures in the park.

Hotchkin reports that the fundraising committee has held meetings and that the body is “an excellent mix of veterans, city personnel and townspeople.”

During April, the timetable calls for non-public fundraising and reports from the fundraising committee every two weeks.

The next meeting of the Veterans Memorial Commission is set for Monday, April 8, at 5:15 p.m. at the Drake Community Library.