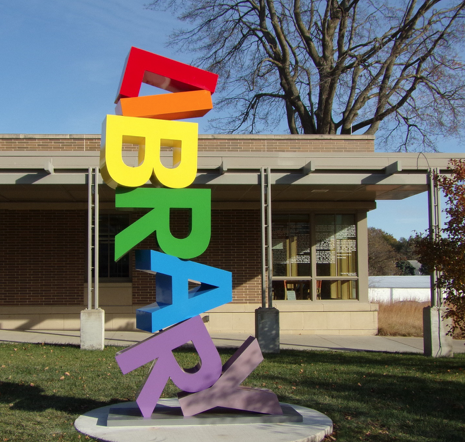 The imagination of Ryan McGuire and the fabrication know-how of ASI Signage joined creative forces to produce the latest addition to Grinnell’s downtown tableau.

Despite a twenty-degree temperature and a brisk breeze out of the southeast, ASI personnel were at work shortly after 8:00 a.m., Friday, November 10, drilling into a concrete pad already poured on the west side of the south wing of the library.  Once anchors were installed, the sign’s base was affixed, and the letter assemblage was added.

According to Library Director Marilyn Kennett, additional signage at the library was under consideration for some time.  While the words Drake Community Library are solidly etched into the west side of the building, the title, especially from a distance, can be missed (as in the picture below, taken from directly across the street at approximately 8:10 a.m. Friday morning).  The words are, to use Ryan McGuire’s term, “muted”—a situation that is common to midwestern signage, he added.

McGuire (pictured below in the yellow jacket) a prominent Grinnell graphic artist, photographer, and web designer, sought to create a destination sign—a concept that means more in the digital age of social media than an awareness that one has arrived where one intended to go. 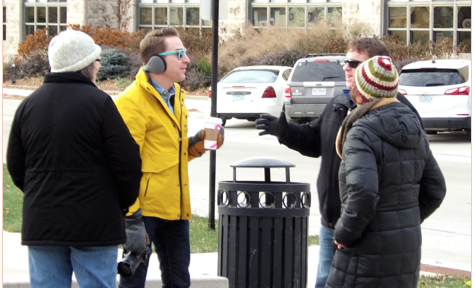 As an example of what he was after, McGuire cites Belize, an eastern-coast Central American country that has become a popular tourist destination—not the country, exactly, but Google images of people standing beside or sitting on large, colorful letters, based on a beach, that spell the country’s name.  Likewise, he mentions Robert Indiana’s Love sculpture—the L with the tipped O sitting on the V and the E—from the late 1960s as the kind of interactive art that not only signifies a location but also invites participation and documentation.  Put another way, more in the parlance of the Facebook Age, people like to take selfies at such spots.

I first set foot in Grinnell on an overcast Thursday afternoon mid-April in 2015.  I was here to meet my wife so that we could look at a residence.  Because we were going to move here as a condition of my wife’s employment, I was exceedingly interested in what the town had to offer.  So I parked my car downtown and took a walk.

I recall several impressive first impressions:  Central Park, the mural on the side of the railroad building near the crossing at Park and Third, the architecture of both the Post Office and the Stewart Art Gallery, the number of bicycle stands, the presence of a wine bar, the presence of a coffee shop, the dinner my wife and I had later at the Prairie Canary, and what seemed to me to be an unusual number of salons, barber shops, and hair care operations.  I remember thinking that Grinnell must be a well-groomed community.

And then there was an impressive-looking building at what I later learned was 930 Park Street.  Except I didn’t know what it was.

“That?” said my wife, who had already been in Grinnell a few times.  “Oh, that’s the library.”

If I were to take that same walk today, I would have no doubt what building I was seeing, and I would add the sign/sculpture to my list of impressive first impressions.

Ryan McGuire hopes that the library sign will spark other such signage innovations.  He

would like to un-mute the Midwest and bring more interactivity, more creativity to the commonplace.  His website speaks of “design awesomeness” and “memorable first impressions.”  His photography is striking, as is his choice in footwear.

The new library sign represents creativity in both concept and execution.  It should be especially enticing to young people and should help encourage them to explore the adventures of reading and the wonders of the Drake Community Library.  The sign adds color and a touch of whimsey to the library landscape and removes all question to casual observers and newcomers on Park as to what the building might be.