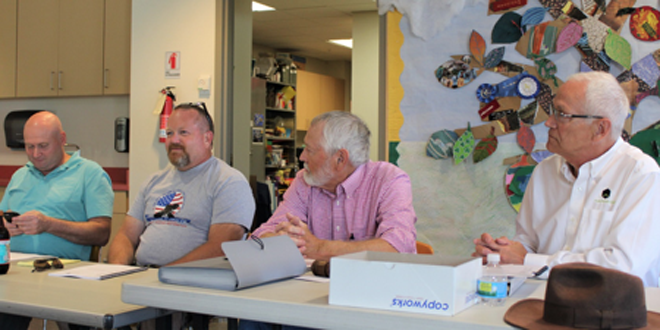 The commission’s normally scheduled meeting date was August 13, the second Monday of the month, but that date posed conflicts with a majority of commission members; therefore, at the July meeting, August 10 was selected as an alternative.

Eighteen residents made up the audience.

The 56-page report, from which Tolan drew summarizing data, followed interviews over the previous few months with “area leaders whose judgment is highly respected,” according to Tolan in a letter that introduces the report to commission members. Researchers interviewed 34 “influential people,” so labeled by the report, in a total of 30 in-depth sessions.

The report lists the names of the 34 interviewees but preserves anonymity by not attributing comments to people.  Their opinions provide an effective balance between purely quantitative and qualitative assessments.

In addition, Amperage received surveys from 15 individuals, including members of the Veterans Memorial Commission and members of the Grinnell Area Arts Council.

Tolan’s presentation began with an executive summary, followed assessments of leadership potential and organizational readiness, a SPOT analysis (strengths, problems, opportunities, and threats), and concluded with findings and recommendations.

The Grinnell Area Arts Council received the highest number of positive responses to the question of which of three entities might best promote both the building renovation and the artist residency program.  The Grinnell City Council received the next number of positive responses, slightly higher than the Veterans Memorial Commission.

As for giving capacity, Amperage sought to determine “if there is the necessary giving potential to conduct a $2 million to $3 million campaign.”

Forty-seven percent of those interviewed responded positively to such a campaign over a three- to five-year pledge period.

Sixty-two percent, however, mentioned other current community fundraising efforts, including the school bond issue, that would impact the Veterans Memorial Commission’s drive.

The executive summary closes with this prediction:  Recruiting fundraising volunteers will be one of your greatest challenges.

Amperage sought to measure the degree of support from members of the Veterans Memorial Commission, the Grinnell Area Arts Council board, and implementation study committee members.

Researchers tested campaign readiness through a series of 12 statements.  Participants were asked to agree on a scale of one to five, with five being highest.  For example, to the statement “We have a strong and positive image and reputation, and our record of benefits to the region is above reproach,” averaged responses resulted in a score of three.

Tolan (right) equated this section to a typical student report card, with five being an A, four being a B, and so on.  All responses were in the C range except for two.  To the statement “We have a solid history of fundraising success,” survey takers’ responses averaged 2.3.  To the statement “Our organization is internally ready—we have in place experienced development staff, highly accurate and retrievable records, adequate support personnel and the financial resources to conduct a campaign of the needed duration,” responses averaged 2.9.

Tolan noted that, based on his experience, the 2.3 response is a concern, but he added, “I was pleased that all five Veterans Commission members took the survey, five Arts Council members, and eight implementation study committee members completed the survey.”

Amperage stresses, “Critical to a campaign’s success is the financial commitment of every member of the leadership.”

Amperage evaluated the organizational readiness of various entities and concluded, positively, that an effective fundraising framework exists in Grinnell.  Tolan cited the Greater Poweshiek Community Foundation that already administers veterans’ contributions.  The gift acceptance policy of the foundation is the type that is “essential during a capital campaign,” the report states.

According to Amperage, strengths of the Veterans Memorial Commission’s campaign for the Prairie Star Residency include the tax levy, which will “support long-term sustainability”; generally positive feelings about the proposed redesign of the building; the consistency provided by RDG Architects, since that firm designed the new Central Park; and the fact that “Grinnell is a giving community with a long and recent history of successful campaigns.”

Among problems, Amperage detected a need for more specifics about the residency program—“cost, design, projected usage, need, [and] long-term sustainability.”  Another problem is that the proposal itself—the mixing of art with a veterans memorial—can be difficult to grasp.

Opportunities, however, are abundant, and they include the potential of “healing veterans through art therapies” and “tell[ing] the stories of veterans and educat[ing] those who have no context of veterans’ sacrifices and accomplishments.” Moreover, the proposal is capable of securing state and national grants and attracting contributions from donors beyond Grinnell.

Four threats concluded the SPOT analysis:  burnout and competition from other fundraising campaigns; perceived lack of need when compared with other issues such as the school bond issue; a recent dip in grain prices; and “concerns about tax deductibility of gifts.”

The Amperage study “for the most part…indicated good support for renovating the [Veterans Memorial Building] and operating a unique national artist residency within it.”

But some qualification is called for when Amperage researchers place the study against findings in other campaigns that the firm has conducted.

Interviewee responses indicate that the goal of $2 million to $3 million may be set too high; that fewer than desired individuals and businesses have the ability or willingness to contribute at high leadership levels ($15,000 up to $200,000); that perception of community support is not as robust as that in campaigns that have met or exceeded goals; that the percent of interviewees set to endorse the campaign is 15 points below that of successful campaigns.

In addition, “We are concerned about the possibility of volunteer fatigue in the area,” Amperage researchers stated in the report.

The report continues, “After analysis and thoughtful consideration of the information gathered from the interviews and the leadership assessment survey, we recommend you proceed with a campaign, emphasizing and setting a $1.5 million goal.  Although not the amount you may ultimately need, this fundraising goal –positioned as Phase I—will set you up for better success.”

The report adds detailed advice to the Veterans Memorial Commission for a successful campaign. Some of the key points are listed below in the words of the report

Final sections of the report include a timeline recommendation, an organizational chart, and appendices. In comments that followed Tolan’s presentation, Commission Vice Chair Randy Hotchkin, above left, raised an important point: The Amperage report is locally focused, he noted, and the organization’s positive, studied comfort with even a scaled-back goal is encouraging.  Adding the potential that comes from a statewide and nationwide campaign only adds to the possibilities of success.

The issue of campaign costs came up—that is, What will Amperage Marketing & Fundraising charge for directing a $1.5 million campaign?  Two members of the Veterans Memorial Commission, Hotchkin and Lease, have been presented with a figure that includes all costs excepting those, such as printing, that would require services beyond Amperage.

However, Hotchkin said he does not feel it is time to release that figure.

“The proposal has been presented to Leo [Lease] and myself for the total…in bi-monthly payments and so forth, and I think until we actually get into that….”  Here there was an interruption regarding extra expenses (printing) as opposed to Amperage’s basic fee for consultation with the fund drive.

Returning to the question of the general proposed cost, Hotchkin continued, “I think that number is best kept with us right now.  We have the proposal,” he added, “but we haven’t made any decisions on that proposal at this time, so I would say before we proceed…[possibly at the next meeting] we would vote on that, and that number would then be presented to everybody.

To clarify the method of charging, Tolan explained that Amperage cannot work for a percentage of funds raised.  To do so is unethical.  Costs are established based on projected time and materials.

Hotchkin returned to the value of professional expertise.

“I don’t feel confident that a campaign put together locally without the use of Amperage would get us into that range [$1.5 million], and I don’t feel that a totally local campaign is going to get us in the ballpark at all.  We need a national campaign, we need the tools, and the PSA’s—the public service announcements or commercials—that we can get out there on social media.”  He also stressed the value of advice from Amperage before approaching major individual and corporate donors.

One audience member asked if the implementation study would be made available to the public.  Lease and Tolan agreed to plans to post a PDF version to the Veterans Memorial Commission website.

As for a campaign timeline, the public kickoff date is uncertain.  Commission members had hoped for a launch date of November 11, but whether enough can be achieved between now and that date remains a question.

Early in the meeting, Commission Chair Lease had called for adding two items to the agenda.  This adjustment was approved by members.

The first addition was a commendation for Randall Hotchkin for his organization and presentation of the flag-raising ceremony at the Veterans Memorial Building on July 4. The event included honoring Isadore Berman upon 75 years of membership in the American Legion.  This ceremony was cited by the implementation study as positive for the image of the Veterans Memorial Commission and, by implication, the Prairie Star Residency program.

The second issue that Lease brought forward was highly personal in nature, and his presentation was especially moving.

He referred, first, to his 32 years of military service and, second, to his five-and-one-half years of taking care of his wife after her diagnosis of ovarian cancer.

Because he accompanied his wife to activities in which she wanted to participate—he and his wife had agreed to live as normal a life as possible—he also took part.  In fact, he learned to knit.  While his pursuit of this activity in public venues such as hospital waiting rooms drew stares from strangers, it nonetheless afforded him an opportunity to be productive, to express himself, and to create something where there was nothing.

“I am a poster child for the idea of art therapy,” Lease said.

Later, he worked with ceramics; he learned to throw pots.

“Consider the arts,” Lease advised, and he added, “Art therapy may be the reason I’m alive today.”

Leased closed this portion of the meeting with a donation to the campaign, accepted by City Council Representative Jim White (below left), who in turn passed the contribution to Nicole Brua-Behrens of the Greater Poweshiek Community Foundation. Lease’s presentation and contribution elicited standing recognition on the part of everyone in the room.

At this point, the meeting was adjourned. The next meeting of the Veterans Memorial Commission is scheduled for September 10 at 5:15 p.m. in the Community Room of the Drake Library.