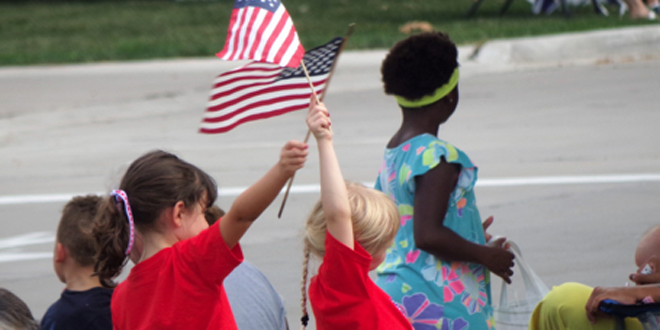 “I love a parade!” sang Frank Luther in 1931—lyrics by Harold Arlen, music by Ted Koehler—and surely most people felt likewise then and do so today.  And for those people, Grinnell’s Fourth of July Parade 2017 did not disappoint.

Perhaps it even converted a few parade curmudgeons.

Arlen’s lyrics, however, focused on a marching band:  “The tramping of feet / I love every beat / I hear of a drum!”  Today’s parades, especially Grinnell’s, offer much more.

Not every participant is present in the pictures that follow, and not all entries are presented in precise order of appearance; still, every person, every organization, every business, and every entity involved with the parade in any way contributed something important. led by the Grinnell Police Department and the Poweshiek County Sheriff’s Office, headed for a left turn on Hamilton Avenue and a turn north several blocks later on Broad.  Later, the caravan turned east on 10th Avenue and south on Penrose to 7th Avenue.

An array of vehicles from Grinnell’s Fire Department reassured residents that they are well protected.

A flurry of flags reminded viewers of the origins of the holiday. The “Not in Service” notice on the front of the Veterans Commission bus could refer to the to the Veterans Memorial Building itself—something that could be changed with favorable results in a November vote. The Elks presented the first of the fraternal and service organization entries.  The Kiwanis, Lions, and Rotary contributed at various points in the procession. Due to the generous nature of parade participants, children were successful in their candy It is hard to be partisan at a parade, especially in the digital age.  Even Democrats and Republicans can come together with a slight alteration of chronology. Presumably the Pizza Ranch driver intended to be in the parade and was not enroute to a delivery, and no doubt the Jimmy John’s representatives found the parade speed somewhat slower than freaky fast.

Grinnell’s Community Band staged an impressive presence.  Harold Arlen likely had such a group in mind when he wrote the lyrics to “I Love a Parade!”

Meredith Wilson also most certainly had marching bands in mind when he wrote Music Man, soon to be presented by Grinnell’s Community Theater.  (Do you have your tickets?) And what would a parade be without school spirit—Tigers and cheerleaders—and Scouts? Several other entries enlivened the parade.  For example, C & K Transfer creatively arranged balloons to represent a flag on the side of a semi trailer. The Humphrey family reminded everyone that it will soon be that special time of year.

For a short time, around 6:10 p.m., the sky darkened and severe weather seemed possible, but it did not develop

Admittedly, this pictorial does not do justice to all the effort, creativity, and goodwill invested in the parade by the organizers and the participants.

In short, it was an impressive parade—an appropriate tribute to the holiday and to the community.