Following routine business such as approval of the meeting agenda and previous meeting minutes, the commission received a fund update from Nicole Brua-Behrens of the Greater Poweshiek Community Foundation.  She reported the sum of $25,246.13 as of April 30.

Later in the meeting, the building fund increased when Boy Scout Troop 303 of Grinnell (above) presented the commission with a check for $160.  The troop earned the money through a fundraising effort and elected to donate to the building fund.

“We thank you for your service,” the presenter concluded. 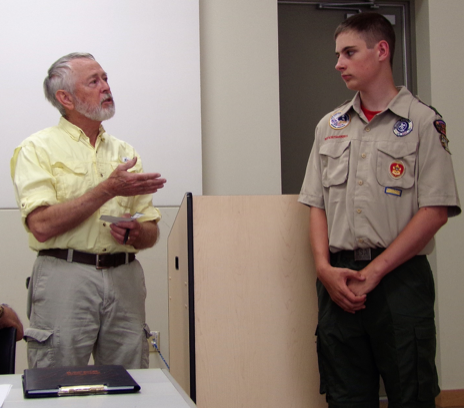 Commission Chair Lease (above) thanked the scouts for their “very commendable” efforts and mentioned ways the proposed residency programs at the Veterans Memorial Building could benefit them.

Regarding the residency program and the building renovation project, Lease reported, “Things are changing for the better all the time,” and he called on Tom Lacina for a progress report.

Lacina’s first item dealt with the project’s name.  To date, the project has been referred to as the Central Park Artist Residency, but Lacina proposed a new title—Prairie Star Residency.  The word “prairie” refers to Grinnell’s prairie location and echoes the town’s slogan.  It also refers to the prairie school of architecture.

Referring to the name, Lacina stated, “We took away ‘artist’ because the residency in fact may not be just artists.”  It is possible, for example, that some residencies may involve art therapy or social issues.  Concepts of the potential purposes of the building are still evolving, Lacina continued, and the name change allows flexibility.

The star represents military service and reflects designs around and throughout the town.

Some logo design examples were available. Lacina requested that the commission consider official approval of the name and mentioned that the domain of prairiestarresidency.org has been obtained with a website established.

Commission members did approve the name in a subsequent portion of the meeting.

Plans call, Lacina continued, for a press release at the end of this month announcing a fundraising committee and an official campaign launch July 4th with a one-page handout to be distributed throughout the community.

As the official launch date approaches, the website at www.prairiestarresidency.org will be further developed.

Fundraising currently is in a quiet phase with some committee formation yet to be completed.

“We’re close, but we’re not quite done yet,” commented Lacina, referring to committee membership.

Lacina also expects that fundraising efforts will need to target a state-wide population.

“We have to go to folks and veterans in Des Moines and Cedar Rapids and Iowa City, and they have to see this veterans program and the Veterans Memorial Building here … being important to all veterans,” Lacina added.

Concluding this segment of the meeting, Lacina stated that plans are underway for “a bunch of activity to be happening within the next 30 to 45 days.”

To expand on the topic of fundraising, Lacina called on Nicole Brua-Behrens to explain an agreement approved by the City of Grinnell for the Veterans Memorial Commission to contract with The Bill Menner Group Inc. for fundraising activities. Cost to the Veterans memorial Commission will be $500 per month, and the contract can be cancelled at any time.

Bill Menner (right) is well known to Grinnellians from various community projects and from his service as Director of USDA Rural Development in Iowa.  An Obama-administration appointee, Menner resigned from the USDA in January of this year and formed his consulting group.

In a February online edition of Wallaces Farmer magazine, Menner, announcing his new endeavor, predicted, “My experience connecting … federal programs to rural Iowans is something that can be useful in any number of situations.”

Menner’s organization is the professional group approved for contract by the Veterans Memorial Commission at the May meeting, although at that time the name was not released.  Leo Lease noted that a degree of voluntary effort is likely to come from Menner, and Tom Lacina clarified that most of Menner’s efforts will be focused on connections and resources beyond Grinnell.

“We need to put people’s talents in the place where they do the best job,” Lease commented.

As the meeting moved toward conclusion, attendees were reminded that the monthly Pizza Ranch fundraising event will take place on the third Thursday of the month, in this case June 16.

Lease also raised the issue of cleaning the inside of the Veterans Memorial Building relatively soon in case interested potential contributors should want to tour the facility.  He said he had been in contact with City Manager Russ Behrens, who suggested postponing such efforts until contractors complete concrete work outside the building as part of the Central Park renovation project.  Recent improvements in the northwest corner of Central Park are apparent. “We had it [the building] pretty well cleaned up,” commented one member of the audience.

Lease acknowledged that fact and emphasized that the cleaning he sees as necessary, having been inside the building recently, is mostly a matter of sweeping and dusting.  He mentioned that he would call on Randy Hotchkin to help him with the cleaning project.

Tom Lacina raised a further suggestion—that areas within the building be marked off, perhaps by ribbons suspended on poles.  With such features, a person touring could better visualize where apartments would be, where the community area would be, and so on.

During the inquiry portion of the meeting, an attendee asked how one might submit an idea for a project slogan—whether there might be a suggestion box stationed at some location such as the library.  Lease responded that such ideas are welcome and that anyone can jot down ideas or questions and give them to a commission member.

A vote to adjourn came at approximately 5:50 p.m.  The July meeting is scheduled for July 17 (the third rather than the second Monday of the month) at 5:15 p.m., in the Community Room of the Drake Community Library. admin - July 15, 2020 0
Tunnell had met Pitts at a track meet at Grambling, another black college, in the spring of 1960. Memphis Grizzles Visa Athletic Center, Orlando 4... admin - June 29, 2020 0
We have spoken to the network and the network executives have assured us they made it very clear to Monique that this cannot...