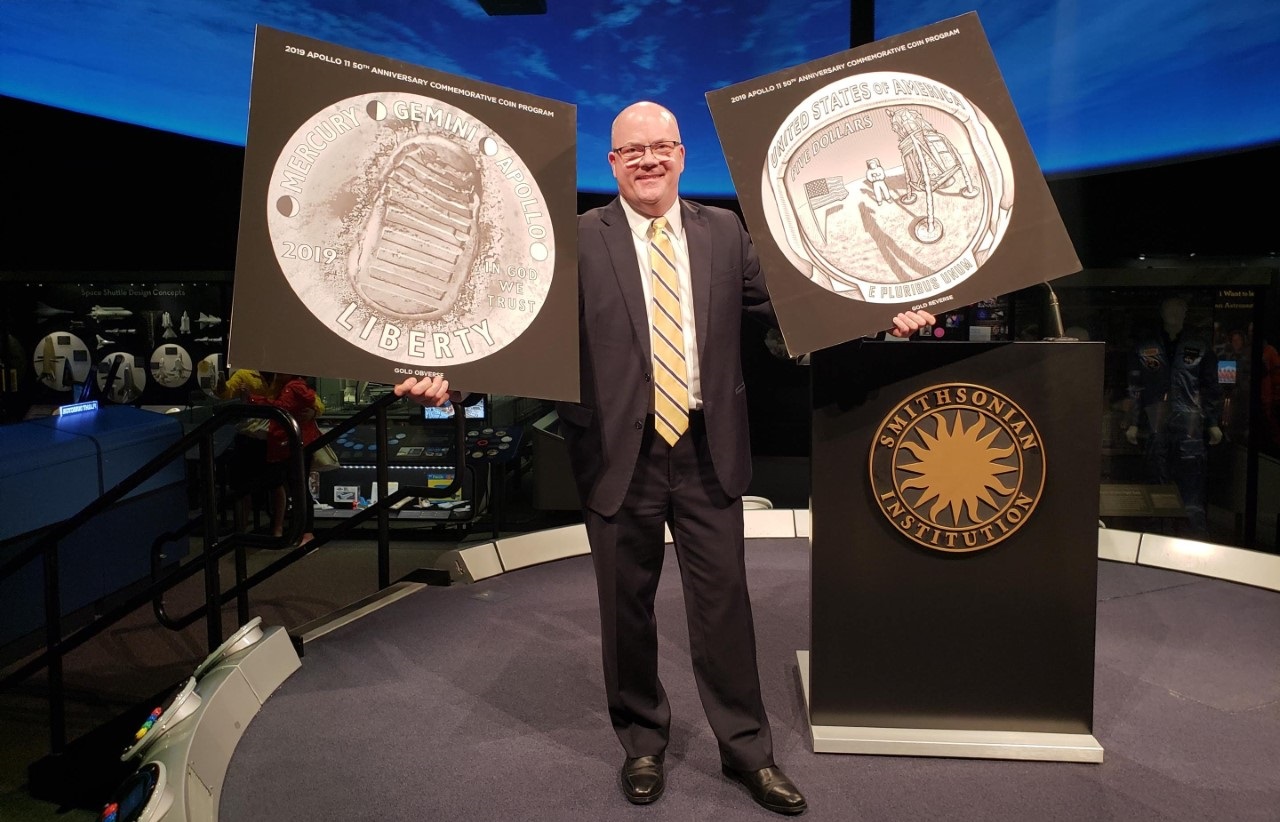 On October 11 at the National Air and Space Museum of the Smithsonian Institution in Washington, DC, the designs of the 2019 Apollo 11 50th anniversary commemorative coins were unveiled with considerable fanfare by the U.S. Mint’s Director David Ryder and officials from the space community. 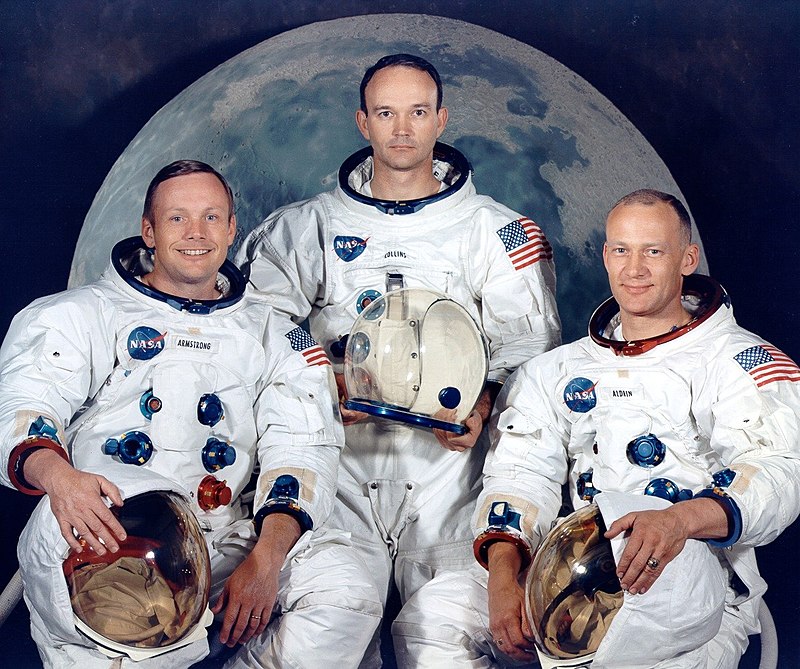 The designs — an obverse showing Neil Armstrong’s boot print as he made his first steps on the lunar surface, and a reverse based on the famous photo of Buzz Aldrin on the moon that features his helmet visor with a reflection of Neil Armstrong, the U.S. flag, and the lunar module — were received enthusiastically by those in attendance.

The launching of these designs took place more than four years after the idea of an Apollo 11 commemorative program was first proposed by Michael Olson, then a member of the Citizens Coinage Advisory Committee in February 2014.

Numerous world coins, beginning in 1969 with coins from Guinea and Fujairah — respectively African and Gulf nations — have honored the moon landing, continuing to the present when many nations are issuing coins marking the 50th anniversary.

Yet the moon landing has oddly never had the single billing on U.S. coinage it deserves, an imbalance Mr. Olson believed had to be corrected. Until now the event was only alluded to on the reverses of the Dwight Eisenhower and Susan B. Anthony dollars with an image of an eagle landing on the moon.

Director Ryder noted in his remarks at the design launch that since 1982 (when commemorative coins began to be issued again after a long hiatus), $506 million has been raised through the sale of those coins, which went to help fund museums, historic sites, and other important programs. He said that if the 2019 Apollo 11 coins are a complete sellout, they could raise $14.5 million.

Half of the funds raised (after all costs are first recouped) will help fund “Destination Moon,” a traveling exhibit of the National Air and Space Museum that celebrates the Apollo 11 mission and those that preceded, concluding in 2022 with a permanent gallery at the museum. The remaining funds will be split between the Astronauts Memorial Foundation and the Astronauts Scholarship Foundation.

In addition, there will also be a previously unannounced special two-coin half dollar set with the Apollo 11 half dollar and one Kennedy enhanced reverse Proof half dollar unique to the set, celebrating the connection between President John F. Kennedy and the U.S. space program. Only 100,000 of these sets will be made, and there will be a household limit of five sets.

The five-ounce piece will only be issued in Proof, while the other three coins will be issued with Proof and Uncirculated finishes. This will be the first-ever five-ounce Proof and the first curved coin of that size and with a reeded edge. Director Ryder predicted that it could sell out in five minutes on January 24 — the day the coins go on sale.

Because of the high level of interest in the space program among coin collectors and in the general population, reflected for example in the popularity of films such as First Man that debuted the day after the design launch — and the relative novelty of curved U.S. coins — these pieces are expected to be extremely popular. They are also expected to inject a welcome dose of enthusiasm into modern U.S. numismatics. 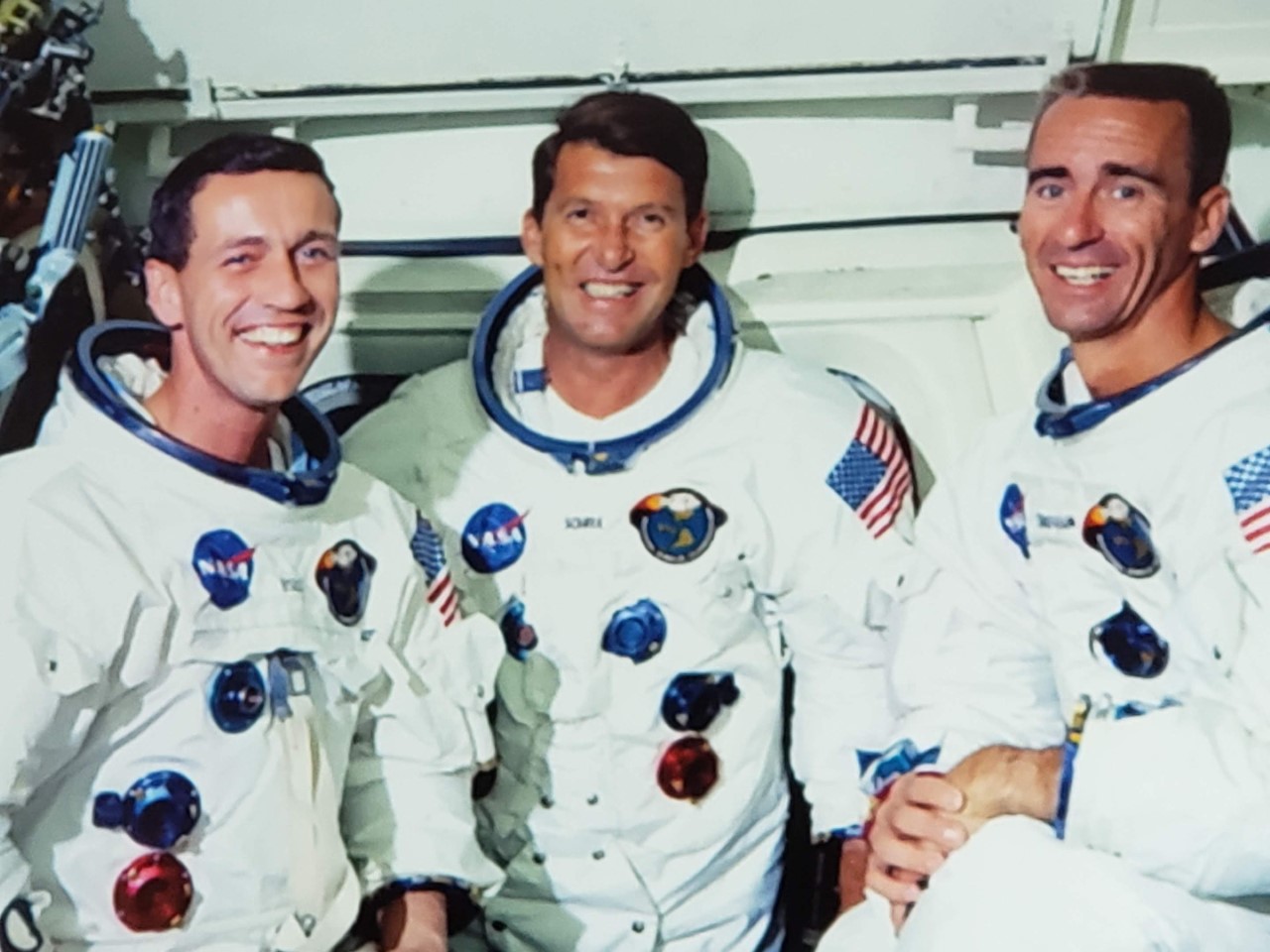 The design unveiling was timed to coincide with the 50th anniversary of another important space milestone, the Apollo 7 mission — the first with a manned crew of three astronauts sent into space on October 11, 1968. One of those astronauts, Walt Cunningham, who flew with Wally Schirra and Donn Eisele, was guest speaker at the design unveiling.

During his presentation, Mr. Cunnigham noted:

This coin celebrates the work of 400,000 Americans in what President Kennedy called ‘the most hazardous, dangerous and greatest adventure’ in which we have ever embarked. I hope that people who purchase this coin will be reminded of our achievements and the sacrifices that we were willing to make — and some people did make — in service to our country and to history. 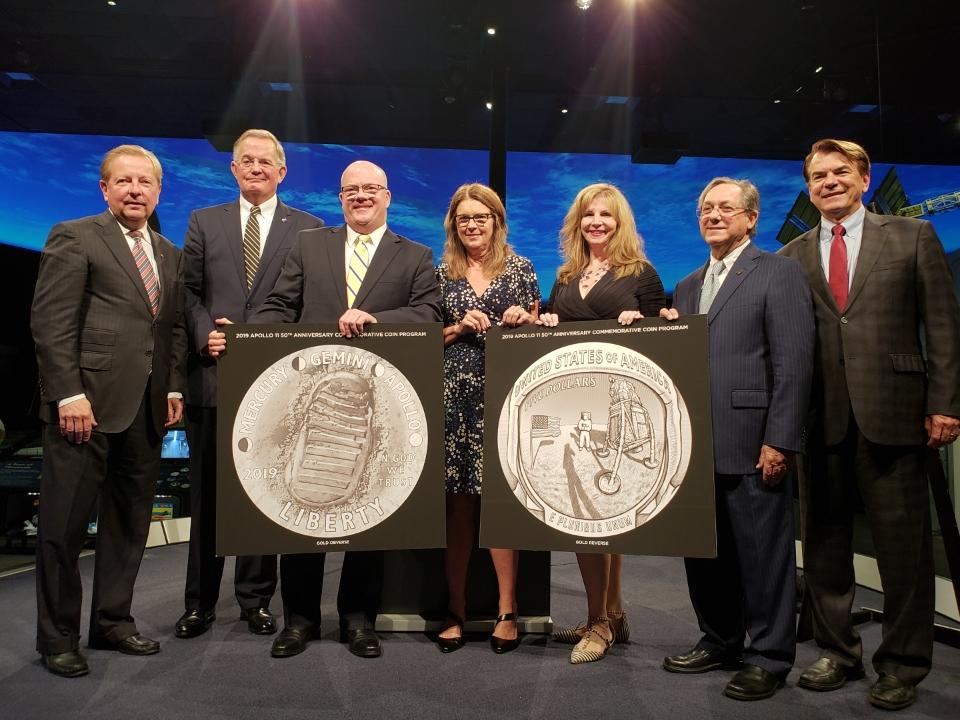 Also in attendance were members of the space community and individuals who were instrumental in creation of the coin program, including: Ellen Stofan, director of the Air and Space Museum, Gabe Sherman, deputy chief of staff of NASA, several representatives of the Astronauts Memorial Foundation, including Thad Altman, its president and board members Sheryl Chaffe, daughter of astronaut Roger Chaffe, and Kathy Scobee Fulgham, daughter of astronaut Dick Scobee, Tammy Sudler, president of the Astronauts Scholarship Foundation, and Michael Olson, former Citizens Coinage Advisory Committee member and a member of the AMF’s board of directors.

Thomas Uram, a CCAC member and president of the Pennsylvania Association of Numismatists, who served on the juried panel of three members from the CCAC and three from the Commission on Fine Arts that selected the winning obverse design, was also present — as was Rep. Bill Posey (R-FL) — who introduced the legislation for the coin program, and his former legislative fellow Dieter Jobe, now a Pentagon official. 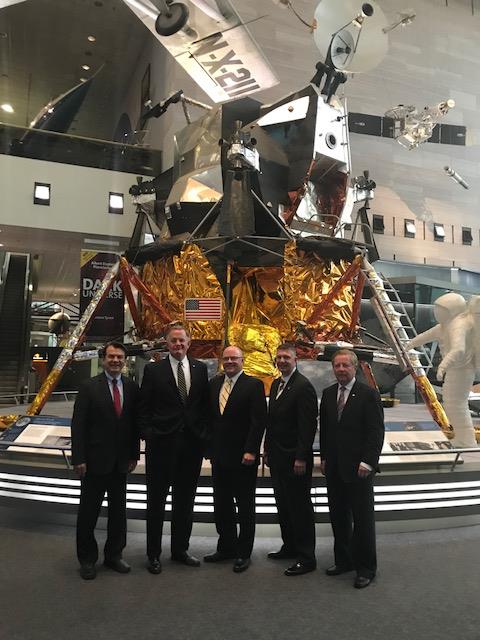 Two daughters of Alan Shepard, the first American to travel in space, were also at the event, and said they were grateful for the efforts of members of the numismatic press to publicize the Apollo 11 coin legislation and build public support for it. That support, as AMF’s Thad Altman said, was crucial in getting the legislation for the coins through Congress. 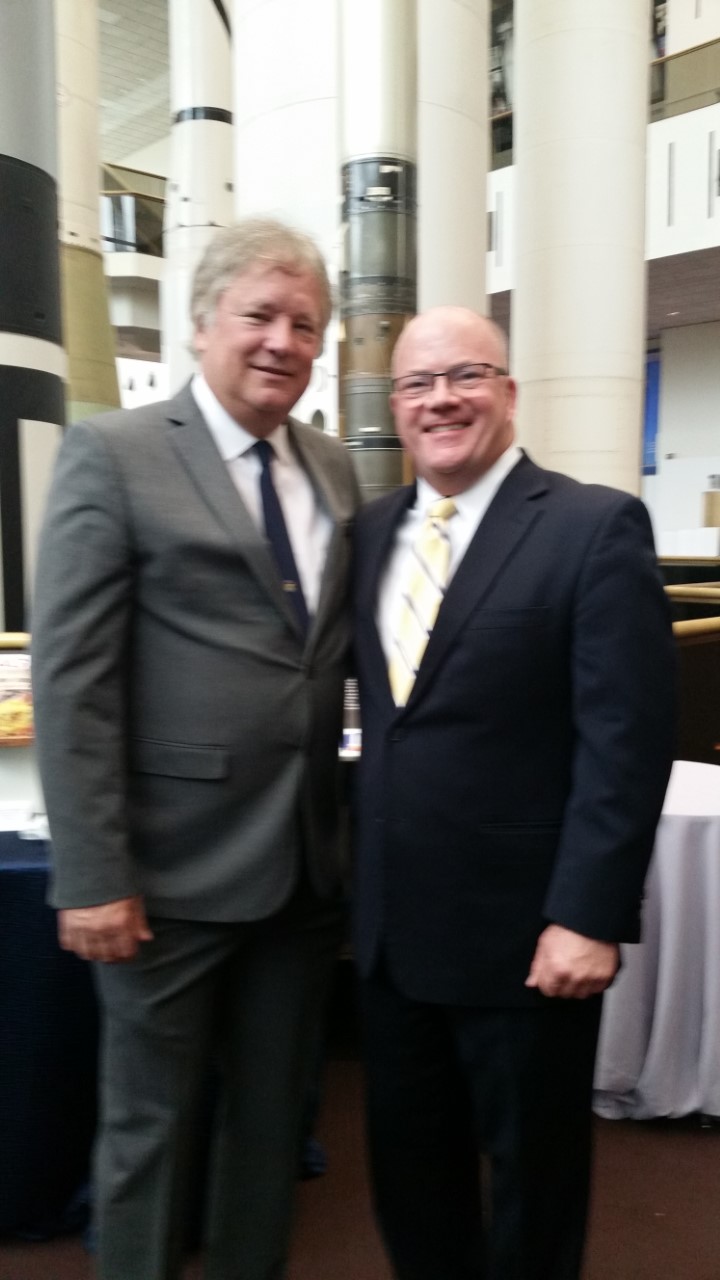 Mr. Olson, a lifelong coin collector who was six in 1969, first proposed the idea of issuing these coins back in February 2014 while serving on the CCAC. The moon landing had a profound impact on him, as reflected in what he wrote on November 24, 2014, in Coin Update, saying:

Now is the time to act to ensure that the greatest achievement in the history of the United States, and some could argue in the history of mankind, is commemorated in a manner befitting its magnitude by the country that against all odds and at great risk and expense accomplished this historic feat.

His Apollo 11-coin proposal received unanimous support from the CCAC in 2014 and again in 2015. But that was just the beginning of a process that would take until December 10, 2016, for the legislation to be passed. It was signed into law (Public Law 114-282) on December 16 by President Obama. 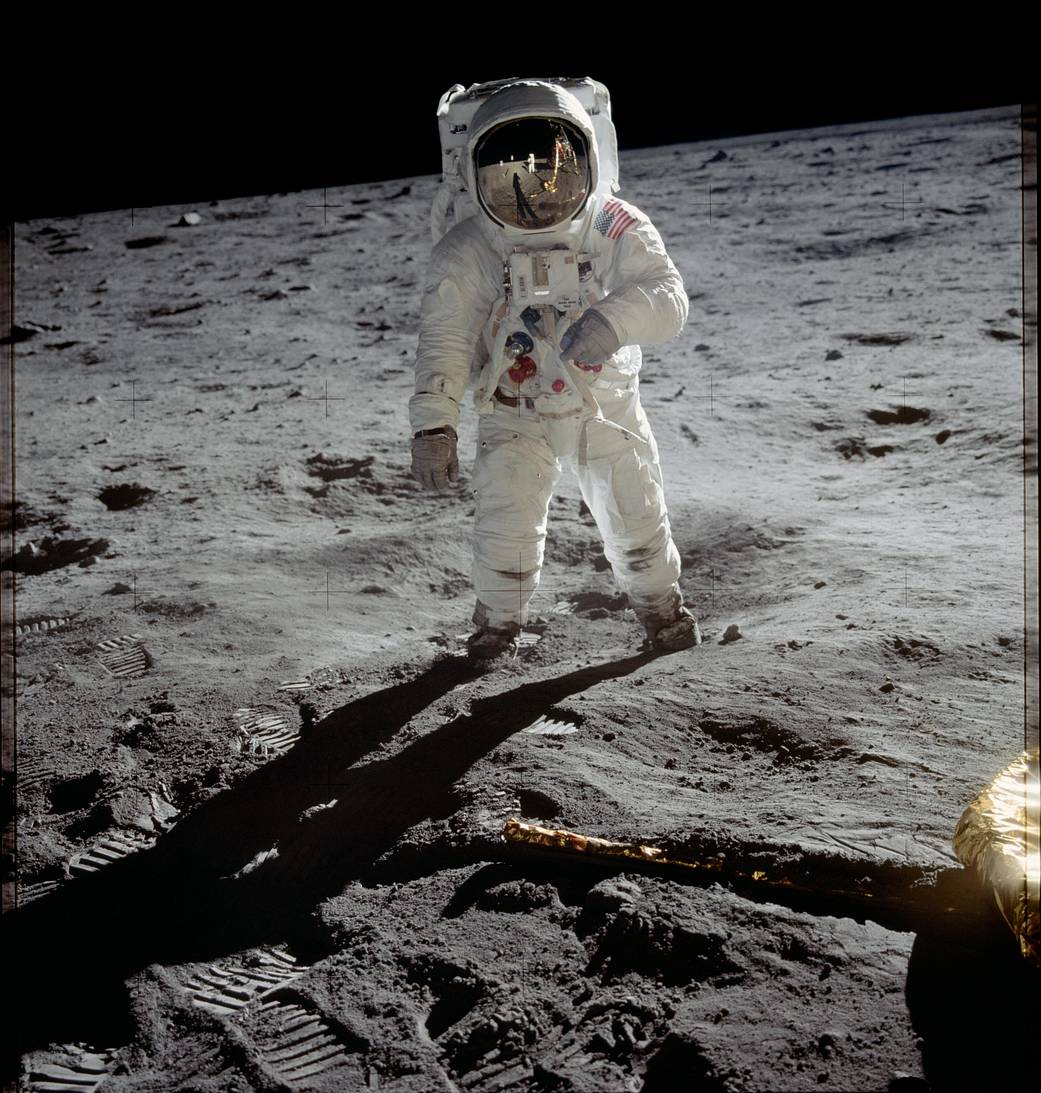 Buzz Aldrin on the Moon. Photo courtesy of NASA.

To get there, Mr. Olson and Dieter Jobe, then a legislative fellow on the staff of Rep. Bill Posey (R-FL), who introduced the House bill on these coins, worked with state officials and members of Congress — as well as astronauts, engineers, and others — to build support for the legislation, focusing on the specific contributions of each state and district in the Apollo 11 mission.

Not many thought we would be able to see this mission to completion, even after we were able to get a bill introduced in the House in 2015, but an incredible team of people from many backgrounds got it done. It absolutely needed to get done, because these astronauts, civilian workers, and our country deserved this recognition.

This experience has been rewarding as I’ve had the privilege of working with Congress, astronauts, families, and other members of the space community, and it led to my recent appointment to the Astronauts Memorial Foundation board where I’ll be able to continue with this involvement.

I don’t think it’s been mentioned before so I want to recognize some journalists for helping to get the word out many times when we needed constituent support in the House and Senate. Specifically, Louis Golino, David Harper, and Robert Pearlman (of CollectSPACE) were there whenever an article was needed at a critical juncture to keep the dream alive and the process moving. They deserve much credit for our success.

I encourage everyone to be ready to purchase these coins when they become available in January. They will surely be in great demand, and a sellout would be a great way to honor this anniversary.